“Gather round folks,” an enthusiastic woman called out to the crowd. One of her front teeth was blacked out and the intonation of her voice seemed oddly antiquated. “Be prepared to see something of the likes you have never seen before. Folks, this one of a kind show is free and truly of the most remarkable order. ”

Barret and I moved in closer with the rest of the curious onlookers and waited for the thick velvet curtain to be drawn. Behind it was an alley with a carpet spread across the cobblestone ground. For some reason the five minute show reminded me of a sly merchant from the Victorian era; all hype and showmanship without actually delivering. You want an elixir to magically cure your gout? Take this cloudy tonic that gives you diarrhea. You want a magic show? Here’s a slight slight-of-hand.

Every Friday from November 1st– December 20th The Rocks, one of the oldest neighborhoods in Sydney, turned into a sideshow-esque bizarre. The cobbled precinct was filled with curiosities inspired by yesteryear: speakeasys, fortune tellers, and the Push Gangs that ran the streets in the 1880s.

After the dubious magician, Barret and I strolled through the market and past girls in flapper costumes. We picked up a black and white patterned mask and continued down George Street. There were white feathers painted on the sidewalk that led to a pop-up bar called Hole in the Sky, admission by mask only.

The front room, where the DJ and bar were located, was relatively empty. However, there were quite a few people tucked into the warren of minimalistic rooms. The moment we made it upstairs I felt like I had crashed a house party. 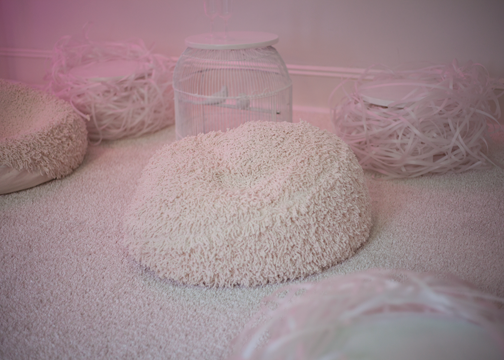 The room fronting George Street was inspired by clouds but had an industrial edge. The chandelier was made with packing material and the short stools were loosely wrapped in plastic cording. I could feel the crunch of white Astro Turf underfoot.

While Barret and I sipped our wine, the strobe light in the corner slid a pale pink wash across the room. It must have been sunset in the clouds; what a curious world indeed.

About: The Rocks Village Bizarre