We had been warned.

It was cold and windy in the shadow of a towering volcano, but we plowed on through the arid terrain. I had misinterpreted the guide’s advice when I got dressed that morning, for now I had so many strata of clothing it would take a geologist to undress me. The vigorous chaffing of three leggings meant we were drawing closer to Mordor.

Although the temperature was low, the rising sun beat down on us when we encountered the Devil’s Staircase. The steep ascent to the South Crater was marked on our map with a frumpy face and I felt like a car overheating. Maybe, I thought, I could peel off one of these tights at the next Port-O-Potty.

When we finally reached the crater, Mt Ngauruhoe (aka Mordor) loomed before us. The cone of the volcano had a scarlet rash and a small trail of steam rose into the clear sky. We walked across the frosty ground and up along the Red Crater Ridge- the most difficult part of the Tongariro Crossing.

As we climbed in elevation, the path narrowed and the winds picked up. At the highest point the gusts rammed our bodies and knocked off loose pieces of clothing. As a skilled and fearless mountaineer, I immediately dropped to the ground and scuttled across like a displeased wet cat. The view was the most breath-taking desert landscape I had ever seen in my life- rugged mountains populated with pools of milky pearls. I wanted to more fully appreciate the panorama, but the violent wind was more than a little terrifying. 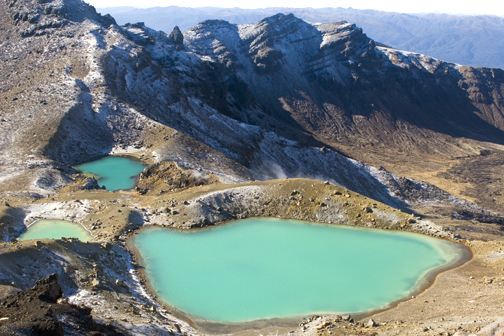 “I am going to lean forward,” Barret yelled over the wind. “Get a photo of me.”

Was he crazy? “Get away from there!” I screamed back.

“Quick, just one photo!” He pleaded.

My numb fingers fumbled with buttons before aimlessly snapping a few photos.

“Did you get it?” Barret asked.

“Yeah, sure.” I hazarded a guess. “Now get away from there!” 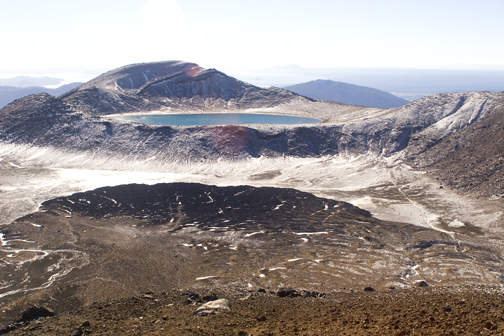 How to get to the Tongariro Alpine Crossing: Inside the Tongariro National Park at the south end of Lake Taupo. The Tongariro Crossing is part of the Northern Circuit track and is not circular. Private shuttle buses operate drop offs & pickups.

One thought on “Tongariro Crossing: Week 64”